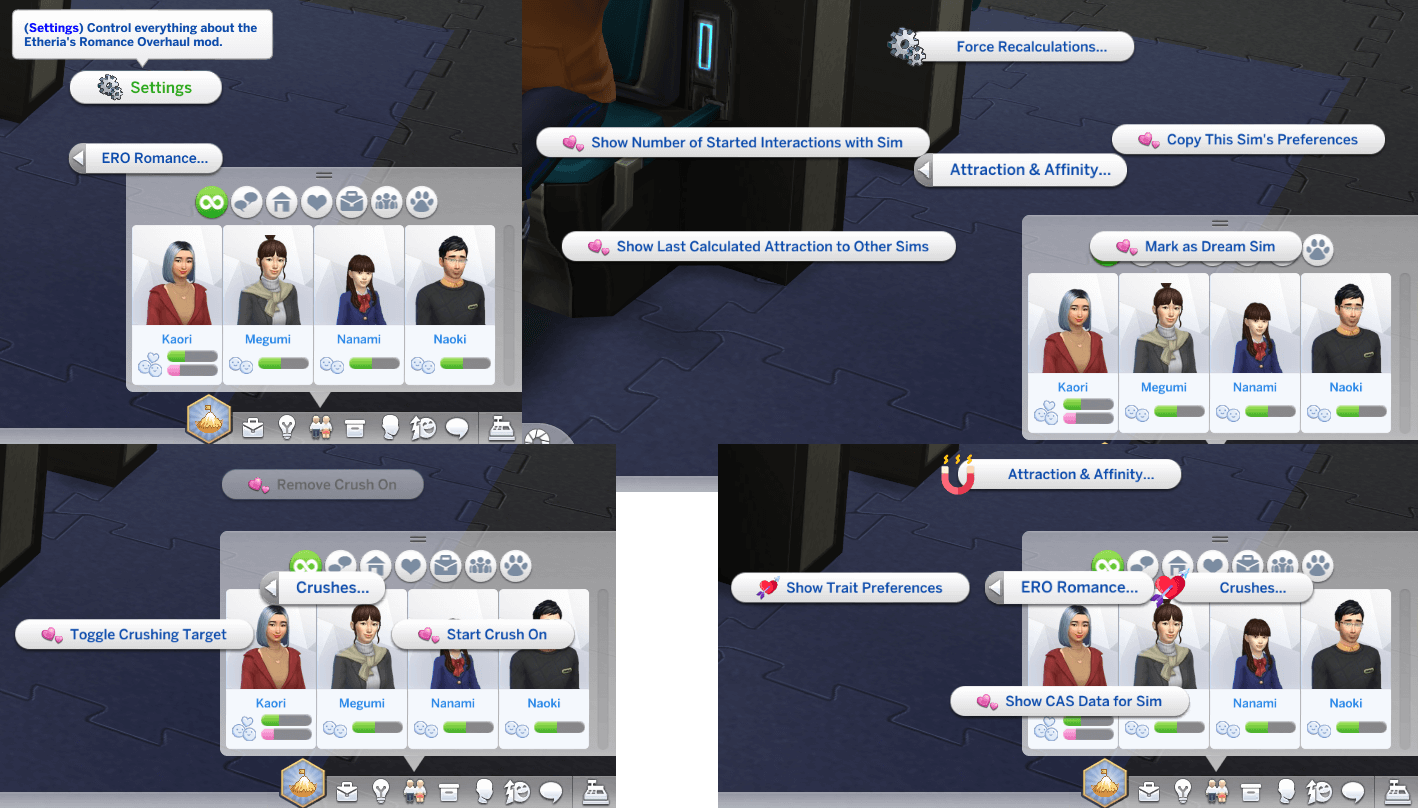 VERSION 3.7 IS OUT! This mod requires S4CL version 1.71 or later, if you don’t already have it then please follow the short instructions under the “Requirements” section below.

Automate your Sim’s physical traits from CAS, see how attractive, how compatible, and how friendly your Sim views all other Sims, randomize everyone’s turn-ons and -offs, enable attractiveness buffs on your Sims, and much, much more! You’ll have to try it to get a feel for everything that it can do! There are even more options available in the shift+click menu on each Sim for an experience tailored exactly to your liking!

Requirements:
This mod requires the Sims 4 Community’s Library v1.71 or later to run. You can get it here: https://simfileshare.net/folder/113129/ – (alternative link here if SFS’s servers are lagging)

ERO 3.7 features:
-Fixed a few minor bugs.
-Added the rest of the nationality traits of the world. No, really!

ERO 3.3 features:
-Added buffs for your Sims around their crushes, and the ability to turn them on or off!
-Added quite a few other fun new crush-specific buffs like after watching the romance channel etc.; play around a bit to discover more!
-Added special buffs for being alone in a room with a crush!
-Added more settings to give you even more control:
Enable/Disable Crush Attraction Buffs
Crush Level Change Per Separate Day Interacted

ERO 3.2 features:
-Added gender-specific turn-on and turn-off lists and settings surrounding them!
-And as usual, if you want your turn-ons and -offs to be copied over from 3.1, just go to the Automate/Randomize/Remove menu and click the “Copy Preferences Lists from Version 3.x” button to port them over! From there, you can modify them further for each gender in the “Add Turn-On Traits” and “Add Turn-Off Traits” sections!

ERO 3.0 features:
Hey you all! It’s that time again! ERO 3.0: Crushing and Blushing is now released to the public! BOY am I excited to have you guys check this one out! This is the wonderful fantabulous CRUSHING AND BLUSHING update! Have your Sims have one-sided crushes and blush the night away, with absolutely tons of customization options for your and your Sims’ enjoyment! Check it out now!

If and only if you are upgrading from version 1.0 of the mod: You will have to reapply your physical traits and attractions (there is also a “Clean Earlier Mod Data from Save” option inside the ERO Settings menu -> Automate/Randomize/Remove section for extra cleanup), but this should be the only trait reset of that kind you’ll need to do for this mod.

Compatibility:
Compatibility is a priority in this mod; it is made to enhance the Sims experience and work harmoniously alongside any other mods like it. There are no known conflicts right now: that includes anything made by KiaraSims4Mods, Lumpinou, Turbo, KawaiiStacie, etc. If you do discover any conflicts with other mods, especially romance mods, please let me know and I’ll check it out when I can.

Translations:
For all those who would like to translate this mod, thank you! No reposts of ERO to other sites are allowed, so send me your translation and I will add it to the mod, and then you can link to it from other sites.

Note:
Some of the Sims 4’s tags are wildly inaccurate. For one particularly bad example, the game labels both red and purple eyes as “amber” eyes (I don’t even

). There’s more detail in the two CAS screenshots included in the pictures section above, but right now the only fix is to set these strangely-tagged ones manually (the full list of hair and eye colors and EA’s versus my tags is in those screenies).

Description:
The Sims is a game we know and love for its ability to engross us in making lives of our own full choosing and control, but let’s face it: for many of us, it doesn’t really feel real in certain aspects of the vanilla game. One of the biggest of these for me is the romance, or rather, the lack thereof! When Sims touch and kiss, they barely get closer to each other for more than a second! C’mon, who the heck hugs their partner like that?! Things like this mean it often feels like the game treats romance as a side-gimmick rather than a real and fully-fleshed-out part of life, and I find myself feeling dissatisfied with how the Sims I have who are supposed to be completely head-over-heels for each other are just…coexisting lukewarmly. I aim to be part of what changes that, with a mixture of attractions, affinities/compatibilities, and opinions your Sim has to/about other Sims, among many other features!

So I felt like creating a mod that makes romance a thing in the Sims that people can connect with, one that’s best made possible through a unique union of code, animation, and storytelling!

Phone Animation For Teens Only

cas mod no make up no accessories on

No Relationship Loss from Reacting to Werewolf Activities